Home News Should the world resume co-operating with the Taliban on protecting Afghanistan’s heritage? 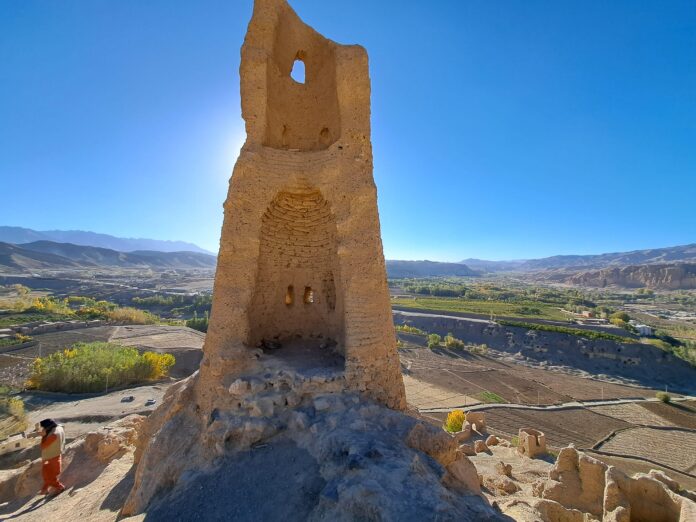 Italy has announced that it is considering resumption of its projects in Bamiyan, Afghanistan, after they were abruptly placed on hold when the Taliban took over the country in August 2021.

The decision, which still has to be approved by the Italian government, was announced by the foreign ministry at the conclusion of a conference in Florence on 11 November. The news came after Unesco and other organisations outlined the significance of the humanitarian assistance provided through cultural projects and their ability to work within the boundaries of the sanctions placed on the Taliban government.

“Having been reassured by Unesco that they will not engage in acts of recognition of the new de facto authorities, Italy is considering to support the continuation of the two ongoing Unesco projects in Bamiyan,” Marco Ricci, the representative of Italy’s General Directorate for Development Cooperation of the Foreign Ministry and International Cooperation, told The Art Newspaper during the conference.

In 2003, the cultural landscape and archaeological remains of the Bamiyan Valley were placed on Unesco’s World Heritage in Danger list. If approved by the Italian government, the projects that will resume will include development of an archaeological park in the vicinity of the Western Buddha niche and conservation and infrastructure development work at Shahr-e Gholghola, a fortified citadel (sixth to tenth century) situated on a hill—one of the eight sites registered by Unesco in Bamiyan.

“Investment in cultural heritage, even in small scale infrastructure or rehabilitation of monuments, can generate significant employment and contribute to household income and livelihoods for people in both rural and urban communities. This type of humanitarian assistance, which supports Afghan people and their heritage, is strongly supported by Unesco,” Unesco’s Afghanistan head of culture unit, Brendan Cassar, told The Art Newspaper. “An investment in the past in this sense is an investment in the future.”

The more than $5m projects will not only preserve crucial heritage sites, but will generate employment for locals and contribute to safely improving tourism at a time when Afghanistan is experiencing one of the worst humanitarian crisis in the world; the UN warned in March that 23 million people, over half the population, suffer from acute hunger.

“I deeply hope we will be able to set up a group of international experts that could orient local authorities so as, at least, to prevent destructive and irreversible interventions,” Mirella Loda, the project coordinator for Bamiyan’s strategic master plan and one of the conference organisers from Florence University, told The Art Newspaper.

During the two-day event, Cultural Heritage in Fragile Context, which was organised by Florence University and the Italian Agency for Development Cooperation (AICS), experts from around the world focused primarily on exchanging ideas to tackle challenges that have risen in safeguarding Afghanistan’s cultural heritage sites as a result of the country’s unique political situation.

The Aga Khan Trust for Culture (AKTC) made a heartfelt case for reengagement with their halted heritage programmes in the country by showcasing the humanitarian cost of cancelled projects that had resulted in lost jobs for those with hard earned skills.

Unesco confirmed that they continue to operate in Afghanistan, however, they can only work within the boundaries of the Transitional Engagement Framework (TEF), a comprehensive planning document for the UN system’s assistance in 2022. The plan prioritises humanitarian assistance and makes reference to supporting preservation of cultural sites but limits engagement and acts of recognition of the current government. This means that the organisation cannot participate in transition of assets to the authorities or provide technical assistance, which excludes projects that involve government owned entities such as The National Museum of Afghanistan.

“Technical assistance is a difficult one. What is technical assistance? The point about [the] framework of engagement with the de facto authorities and the international communities’ general feeling, it’s not very clear,” said Cassar.

However, Cassar stressed that the lack of technical exchange is not placing sites such as Bamiyan in any imminent danger and although the situation is not optimal the limitations do not stop the organisation from effectively working in the country.

Prior to the conference, a senior Bamiyan Taliban official told The Art Newspaper that Shahr-e Gholghola was in need of urgent conservation works for which he did not possess the funds or expertise to conduct. “If conservation work is not carried out in Shahr-e Gholghola within a year the whole site can be affected and destroyed. The issues will become much larger,” warned Mawlawi Saifurrahman Mohammadi, the Bamiyan province’s director of the ministry for information and culture.

Cassar recognised that Unesco had received requests from the Taliban government to take on conservation work on pre-Islamic and Islamic sites. He also accepted the speed at which Afghanistan’s authorities had responded to some of Unesco’s concerns had been positive, such as halting construction works opposite the Buddha niches in Bamiyan to revive an old bazaar within hours, but stopped short of acknowledging that there is an official policy by the new government to invest and protect heritage.

“I can’t speak to what their attitude is and I can’t speak to what all of the policies on heritage for the de facto government is. I haven’t seen a statement on it recently. What I can say is based on the requests (which cover a range of historic periods, Islamic and pre-Islamic) that have come to our office and have come to Unesco in general—which is for; doing archaeological investigation, trying to protect sites from illicit traffic, trying to do monument restoration in various provinces including the world heritage properties—[…] there is support for that within the de facto government,” Cassar said.

Another project that has been placed on hold in Bamiyan since the change in government is a Japanese funded project to stabilise the Western Buddha niche, which is in danger of collapsing due to huge cracks in the cliff. The niche once housed a seventh-century, 55m Buddha statue before it was destroyed by the Taliban in 2001. Cassar told the conference audience that discussions to revive the project were ongoing.

Participants at the conference included a wide range of experts including, but not limited to, Aga Khan Trust for Culture, Teikyo University, International Council on Monuments and Sites (ICOMOS), The Walled City of Lahore Authority, The International Centre for the Study of the Preservation and Restoration of Cultural Property (ICCROM), and the International alliance for the protection of heritage in conflict areas (Aliph).