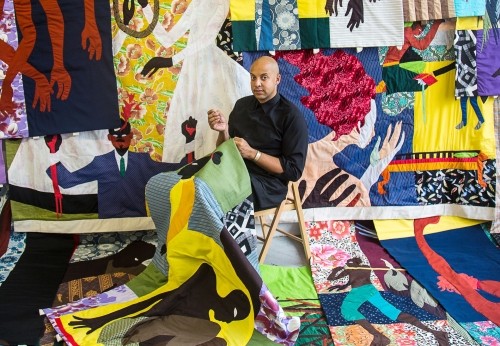 James Cohan is delighted to announce its representation of Brooklyn-based artist Christopher Myers. The gallery will present a solo exhibition of Myer’s work in February 2022.

Christopher Myers is an artist and writer whose work across disciplines is rooted in storytelling. Myers delves into the past to build narratives that speak to the slippages between history and mythology. His diverse practice spans textiles, performance, film, and sculptural objects, often created in collaboration with artisans from around the globe. He has worked with traditional shadow puppet makers in Jogjakarta, silversmiths in Khartoum, conceptual video artists in Ho Chi Minh City, young musicians in New Orleans, woodcarvers in Accra, weavers in Luxor, metal workers in Kenya, and textile printers in Copenhagen. These collaborations are driven by his interest in understanding the ways in which globalization is intimately intertwined with notions of self and community.

Myers is part of a lineage of artists for whom the seemingly domestic and ornamental quality of the tapestry belies a rich tradition of radical craft. This medium has created physical space and pathways for resistance and liberation within the handmade object. In his ongoing series of textile works, Myers uses appliqué, a technique that appears often in quilting and banner making, and has developed as a tangible union of diverse cultural and visual practices—African, European, and American. Working with a community of artisans in Luxor, Egypt, Myers has created tapestries with textiles as varied as 70 year old sail cloth, Nigerian wedding lace, World Food Programme grain sacks, and cotton harvested in Xinjiang and printed in Vietnam. He works with materials that hold histories—of movement, migration, and exchange—within them.

Each of Myers’ artworks highlight extraordinary histories and contexts, translating careful research into evocative material form. One recent monumental tapestry, What Does It Mean to Matter (Community Autopsy), 2019, depicts the abstracted figures of nine victims of police violence, yellow and red fabric targets indicating wounds mapped by forensic autopsy diagrams. The Talented Tenth and the Beauty of Statistics, 2019, transforms the data visualization created by WEB DuBois and his team of Black sociologists for the Paris Exposition of 1900 into abstract geometric appliqué. His ongoing series, Vxllrncgnt (Vexillarum incognito), 2018 – present, drawn from the traditional Asafo flags of Ghana, conceives of flags for nations that have yet to be born and social structures that will never come to be. Myers’ sculptural oeuvre similarly fuses the imaginary with the specificity of the local. The Art of Taming Horses, a new site-specific commission for the 2021 edition of Desert X, subverts the archetypal language of the equestrian monument to pay homage to a community rather than a heroic individual.

A playwright as well as a visual artist, Myers has an enduring interest in the theatrical. He notes of his multidisciplinary practice, “I am interested in speaking as many languages as possible to reach as many people as possible.”

Working with longtime collaborator Kaneza Schaal, Myers has designed theater that has travelled from PS122 in New York City to the Genocide Memorial Theater in Kigali, Rwanda. Major upcoming projects include Fire in the Head: The Journals of Vaslav Nijinsky, an evening-length theatrical work conceived, designed and directed by Myers, which will premiere at the FIAF-French Institute Alliance Française’s Crossing the Line Festival in late 2021, and King Leopold II, co-directed by Myers and Schaal and designed by Myers, which will premiere at the Walker Art Center in January 2022. He has collaborated with Hank Willis Thomas on a short film Am I Going Too Fast, which premiered at Sundance, and has written essays that have been published by The New York Times. Currently, he is working on a book comparing global censorship methodologies.

Christopher Myers (b. New York City in 1974) earned his B.A. in Art-Semiotics and American Civilization with focus on race and culture from Brown University in 1995 and participated in the Whitney Museum of American Art Independent Studio Program in 1996. His work has been exhibited throughout the United States and internationally at venues including MoMA PS1; Art Institute of Chicago; The Mistake Room, Guadalajara, Mexico; Akron Art Museum; Contrast Gallery, Shanghai; Goethe-Institut, Accra, Ghana; Kigali Genocide Memorial Center, Rwanda; San Art, Ho Chi Minh City, Vietnam, and the Studio Museum in Harlem. Myers is currently working on a Percent for Art Commission at the Brooklyn Brownsville Public Library, expected to be completed in 2022. His work is included in the permanent collections of institutions including the National Gallery of Art, Washington, D.C.; Brooklyn Museum, New York; Solomon R. Guggenheim Museum, New York; Museum of Contemporary Art Chicago; Los Angeles County Museum of Art; Mead Art Museum, Amherst, MA, and the Studio Museum in Harlem. Myers won a Caldecott Honor in 1998 for his illustrations in the book Harlem and a Coretta Scott King Award in 2016 for illustrating Firebird with Misty Copeland. Myers currently lives and works in Brooklyn, NY.

Cecilia Vicuña: “I have been hiding my paintings for almost 40 years”