Home News Dimitrios Pandermalis, director and curator of the Acropolis Museum in Athens, has... 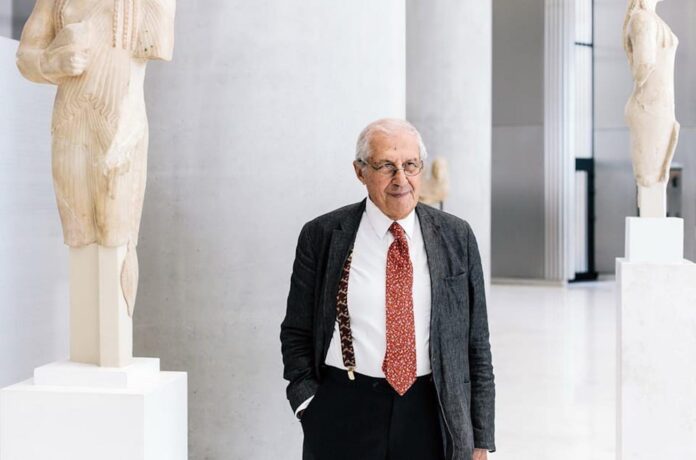 The leading Greek archaeologist, Dimitrios Pandermalis, who has served as president and curator of the Acropolis Museum in Athens since it opened in 2009, has died, aged 82, the Ministry of Culture announced on Wednesday. “It is with great sadness that we say goodbye to a rare scientist, an inspiring teacher, a valuable colleague, a good friend,” Greece’s culture minister Lina Mendoni, said in a statement.

In addition to leading the planning, construction and operation of the new Acropolis Museum in the city centre, which was built with the purpose in mind of one day reuniting all the Parthenon marbles, including those now held in the British Museum, Pandermalis has led the excavations at the ancient site of Dion in the foothills of Mount Olympus since 1973. He was also president of the history and archaeology department, and dean of the Philosophy School, at the Aristotle University of Thessaloniki.

“However, his great work, his life’s vision, was the Acropolis Museum,” Mendoni said, “which he served from the first moment, with all his strength. He was the soul of the museum, when it was still only an idea on paper. He was there, at every stage of its creation and until its completion. We owe it to him that Greece has one of the greatest and most beloved museums in the world, a model of cultural management, which honors our culture and our homeland.”

Nikos Stampolidis, the Acropolis Museum’s director general, said in a statement, that it was “not easy to talk about the loss of such a beloved person as Professor Dimitrios Pandermalis, whom I had the good fortune to know since the early 1970s as a student”. But, Stampolidis added, “the memory of the people who depart is kept intact in future generations through their work. And his greatest work and contribution is the creation of the Acropolis Museum.”

Pandermalis was an outspoken proponent of the reunification of the Parthenon marbles, saying that returning the sculptures now held in the British Museum to Greece “is the one and only solution” to the long-running cultural debate between the two countries.

When the new Acropolis Museum opened in 2009, Pandermalis said it was “the ideal site” for all the original Parthenon sculptures to be displayed together. Today, a special gallery holds the sculptures that once made up the ancient temple frieze, with those elements removed by Lord Elgin in the 19th century replaced by plaster copies. “It is not possible for the sculptures to have one part—to have a torso in one museum and the head in another. From the moment that they belong to the same work, they must be reunited.”

Framed by a Painting of the Hudson, the River Is the Art World’s Latest Watering Hole in Downtown New York