Home Events Theatre The theaters that have given up the usual stage: Street theater Les... 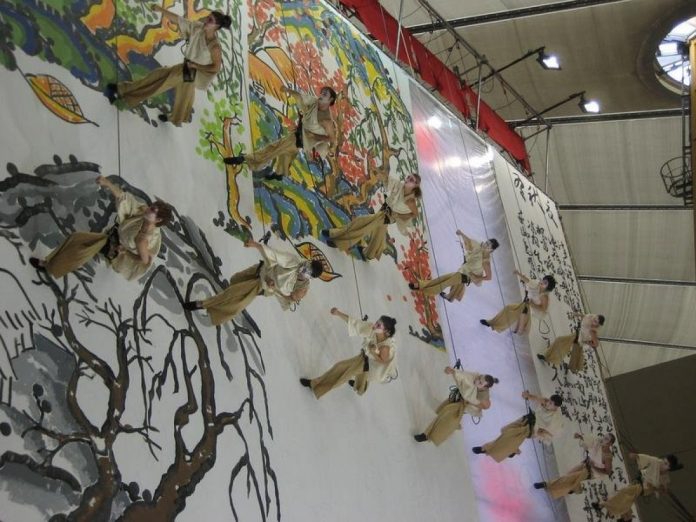 Perhaps the most important thing in the theater is the stage. This is the basis of our concept of theater. However, modern theater, like any other art, often breaks formed stereotypes and invents the most unthinkable forms of the stage or does without it altogether. For example, performance can hang in the air, or the whole city can instantly become a theater. We have compiled the top 5 theaters in the world, whose stage is not like itself.

The stage for Les Passagers is public buildings, parks, squares, historical monuments, industrial dumps. These spaces themselves are endowed with meaning, and when theatrical, choreographic, and pictorial content is superimposed on it, they open up to a new Universe in which life develops in a vertical plane. Scaffolding, pyramids, wires, ropes, and nets – the whole picturesque urbanistic structure is used until it becomes clear that the urban architectural environment evolves with a man.

One of the most unusual theaters that have abandoned the classical stage is the French street theater Les Passagers. This project did not exclude the stage from its productions completely. It rather turned it over on its side, which is why the theater began to be called vertical. Indeed, for their aerial performances, the team uses huge canvases that are installed perpendicular to the ground.

Such structures serve as both a stage and a projector for the actors, which replaces the scenery. A picture is projected onto the canvas, against the background of which the artists show the audience the next production. The actors themselves move in the air using special ropes, as aerial acrobats do. The performance is accompanied by music and stunning stage outfits, which makes the product look even more spectacular.

The canvases are installed on city buildings, bridges, tower cranes, historical and architectural monuments, industrial dumps, abandoned factories, and factories – in general, in places that are completely inappropriate for theatrical traditions. However, sometimes performances are still shown in city squares. Vertical planes are also installed on them.

The theater troupe is relatively small – twenty people, but a wide variety of artists work in it: dancers, musicians, circus performers, artists, and representatives of video art.

The performances of Les Passagers have long been popular in Europe, Asia, the USA, and Brazil.