Catherine Crawford Luber came to Minnesota from the San Antonio Museum of Art. There, she nurtured collections of African American and Aboriginal artists. She also expanded programs for youth with low income.

The Minneapolis Institute of Art has chosen Catherine Crawford Luber as its new director and president of the museum.

Luber heads to Minneapolis from the San Antonio Museum of Art, where the Texas native has been a director for the past eight years. She succeeds Kevin Feldman, who left the Minnesota Museum in March 2019 to become the new director of the Washington DC National Gallery of Art.

Luber said in a statement that throughout her career, she had demonstrated the importance and power of art to impact people and communities. Now, she is eager to get to know the communities of the Twin Cities.  is Catherine Crawford Luber is going to share her experiences to ensure that the Minneapolis Institute of Art keeps on being an art museum where everyone can not only learn about different cultures but also see and participate in their own history.

During her time at the San Antonio Museum, Luber became famous for more than doubling museum attendance and tripling the number of family members. Luber also expanded the collection of African American and Aboriginal artists at the Texas Museum and introduced a program that worked with city public schools to support at-risk and disadvantaged Hispanics through art. Luber will take on her new role in Minneapolis on January 2, 2020.

She launched a five-year strategic plan in 2013. After that SAMA’s annual attendance doubled and family members tripled. Museum investment has increased both in exhibitions and programs as well as in public awareness and engagement initiatives.

These events were supported by a proactive fundraising approach that generated over $ 42 million in major gifts, including $ 5 million for an endowed curatorial position in American art, nearly $ 10 million in investment in museum campus infrastructure, and $ 4 million to support an expanded list of exhibitions and programs commemorating the city of San Antonio’s 300th anniversary in 2018.

This includes the internationally acclaimed museum exhibition “Spain: 500 Years of Spanish Painting from Madrid Museums”, organized by Luber, which brought over 40 works from the Prado and other Spanish collections to San Antonio, as well as a visit to the King and Queen of Spain.

One of her initiatives was to coordinate the work of local public schools and private donors, in tandem with the museum. Her aim was to support at-risk and underserved Hispanics in the city’s public schools and to expand their exposure to the arts through supported visits and programs at SAMA.

The impact of this work was highlighted by the IMLS Grant to Study the Effectiveness of Art Classes for Assessing Children in Low-income Communities.

More recently, Dr. Luber worked with Trinity University to conceptualize and fund a two-year postdoctoral program. It combined research with developmental courses – and hands-on museum practice – for students from under-represented communities who were interested in pursuing careers in art museums.

In tandem with these community-focused programs, Luber also oversaw the expansion and diversification of SAMA’s collections and exhibitions, including the acquisition of a series of works by African American artists in 2018, as well as a number of exhibitions focusing on widespread themes such as Mexican 18th-century art to contemporary Aboriginal art from Australia.

SAMA is also known as a home to one of the country’s most important collections of Latin American art: The Nelson A. Rockefeller Center for Latin American Art includes over 12,000 objects from areas of Ancient America, Spanish Colonial, Republican Eras, Art Nouveau, Modern, and Folk Art.

Dr. Luber said she was very excited to be able to leverage a huge legacy of success and innovation as she moves into the next hundred years at Mia Minneapolis.

A committee appointed by Mia’s Board of Trustees identified Luber through a thorough search. The process was varied in race, gender, LGBTQ + status, nationality, and geography. On January 2, 2020, Luber will assume his new role as head of Mia, Minneapolis’ largest art institution, overseeing the museum’s renowned encyclopedic collection and a staff of 250.

Dr. Luber, who has led the San Antonio Museum of Art for the past eight years, will join a small number of women leaders in museums with budgets of $ 20 million and above. In January, she will take up this position at the Minneapolis Encyclopedic Museum, which is internationally recognized for its collection of Asian art.

Female museum directors have achieved parity in all areas. But, according to current statistics provided by the Association of Art Museum Directors, a gender gap persists in major museums. Currently, only 10 of 42 institutions in North America are headed by women with a budget of more than $ 20 million. As a reminder, Ms. Feldman is the first female director in the 77-year history of the National Gallery of Art.

Texas native Dr. Luber, 58, came to her post in San Antonio with art history and entrepreneurial background. After receiving her Ph.D., she worked at the Metropolitan Museum of Art and the Philadelphia Art Museum. in 1992 from Bryn Mawr, focusing on paintings by Albrecht Dürer. She also founded, operated, and sold a successful spice company after completing her MBA from Johns Hopkins in 2006.

During her time in San Antonio, she more than doubled museum attendance and participation, increased African American and Aboriginal art collections, and introduced a multi-year program to reach Latin populations in the city’s public schools.

David Wilson, chairman of the board of the Minneapolis Institute said that Katy was a San Antonio leader in spreading art to underprivileged communities, adding that they were looking for someone who genuinely understood the new possibilities and, frankly, some of the challenges of encyclopedic museums.

Mia enters a period of transformation as they embark on an ambitious campus renewal and redouble their initiatives for inclusion, equality, and diversity to ensure that their outstanding art collections, ambitious exhibitions, and educational programs serve every community. Katie has the curatorial and management experience they sought from a leader. She has a genuine and passionate vision of how art can attract, educate, and delight.

What one should know about Mia

The Minneapolis Institute of Art (Mia) was formerly known as the Minneapolis Institute of the Arts. It is home to one of the finest encyclopedic art collections in the United States, with over 80,000 artworks representing 5,000 years of world history. Highlights of the permanent collection include European masterpieces by Rembrandt, Poussin and Van Gogh; contemporary painting and sculpture by Picasso, Matisse, Mondrian, Stella and Close; as well as internationally renowned collections of prints and drawings, arts and crafts, modernist design, photography, textiles and art from Asia, Africa and Native Americans.

To encourage private collecting and help with the acquisition of important works of art, the museum has established interest groups associated with the museum’s seven curatorial areas. Groups plan lectures, workshops, and travel for members.

The museum regularly hosts a series of exhibitions featuring traveling collections from other museums. Local business partners fund many of these exhibitions, and some represent artists on public tours of the exhibition.

The museum houses the Minnesota Artists Exhibition Program, an artist-driven program dedicated to exhibiting the work of artists living in Minnesota. The institute has a number of exhibits outside the building. A pair of Chinese lions sit on either side of the 24th Street entrance. They were a gift from Ella Pillsbury Crosby in 1998. As the museum curator decided that it would be too difficult to export the 18th-century statues, new statues were carved in China in the 18th-century style.

In the Target park, which is behind the museum, there are several modern statues, including an unnamed bronze work (c. 1968) by Pietro Consagra, African Granite Samba (1993) by Richard Erdmann and L’arbre de vie in stainless steel and pigment ( 20th century), designed by Jean Willie Mestach and manufactured by Michael Chowen. There is also a granite and steel pavilion called The Labyrinth (1993) by John Willenbecher. Wide lines are cut through the pavilion’s steel roof so that when the viewer stands inside, the maze can be seen by looking up. 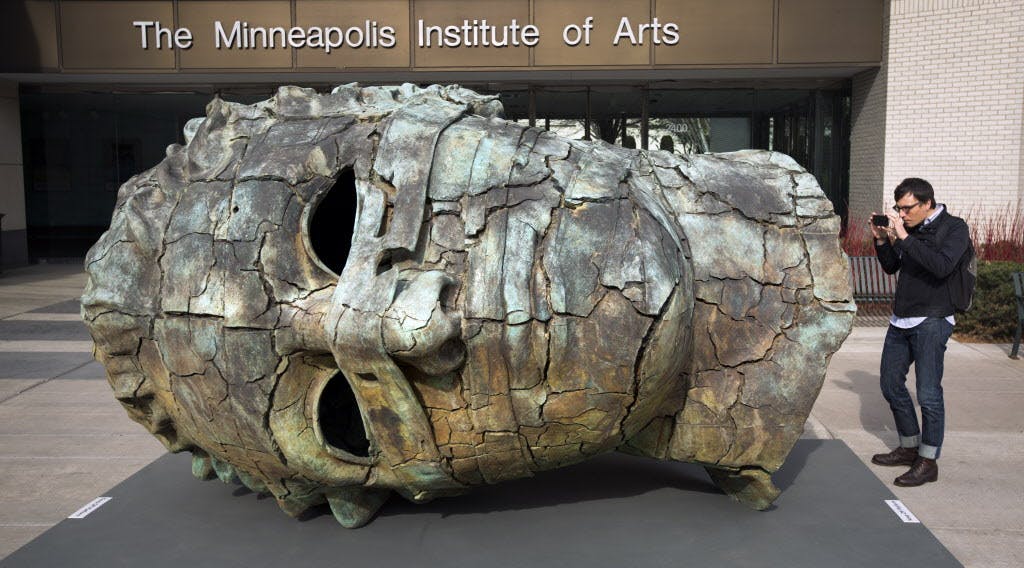 A Madrid Plaza Transformed Into a Temporary Park With Over 35,000 Square Feet of Grass